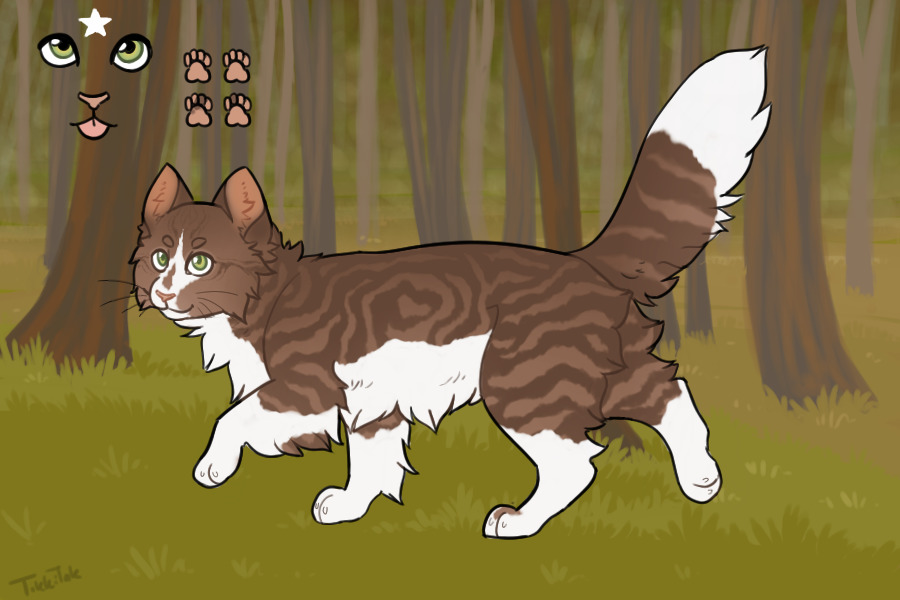 Sedgestar came to ElmClan by pure mistake. She wasn't born into the clan, unlike many cats, but she instead came to it in a rather unusual way.
The previous leader, Atanzawstar, was on patrol when he found the small kit washed up in the beach grasses on the southern end of the territory. After checking to make sure the small kit was still alive, he brought her back to the camp, dumping her in front of Mìnyu-avitra, the clan's tiretu, or healer. Though challenging, Mìnyu-avitra was able to save the kit; the tiretu spent several long days and nights monitoring the nearly-drowned kit the waves had left in the grass.
As was the clan's custom, Atanzawstar had the naming rights to the unclaimed kit, who was barely old enough to talk, as she didn't know her own name. Atanzawstar held an official naming ceremony, at which he pronounced the tiny kit to be Grasskit.
Grasskit grew, though never became as big as other kits her age. Eventually, she became an apprentice, and her name became Zeswavipaw. After a particularly long apprenticeship, Zeswavipaw became Txe'lan-azeswavi, and was accepted as a full member of her clan.
Fifteen moons later, she was appointed deputy following the retirement of the current deputy of the time, Venzek-akenten. She was not a popular choice within the clan for the position since she was just shy of twenty seven moons old, but Atanzawstar had always seemed to have a soft spot for her; he claimed her as if she were his own kit.
Just five moons later, she found herself in the position of leader, following a horrific incident where Atanzawstar was hit by a reckless boat. The clan was used to humans; they lived close enough to them. But no one was prepared for Atanzawstar to go out on that patrol with two others, only to never come back home.
Lost, and very confused, Txe'lan-azeswavi turned to Eywa in order to help lead her clan. Eywa gave her her eight lives, telling her that ElmClan needed the stability she could provide, and that her strength would be needed in the coming weeks. They renamed her, to Sedgestar, and told her that she would be the last cat of ElmClan to bear the suffix of star.
Almost a year and a half later, Sedgestar had gained the respect of her clan. She was young, she was inexperienced, but she proved quickly that the only interests she had were in the name of the clan. She wasn't the best fighter, but she was the best thinker; this proved an advantage in settling conflicts. She wasn't the fastest, but she was steady. She didn't have family, but she treated all others as if they were her own.
She lacked experience, lacked a clear origin, but she would be the one to make ElmClan great.